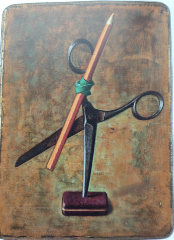 Michael Burdzelian was born in Moscow. After his Masters Degree in the former Soviet Union he moved to the West and now lives and works in France. Severel exhibitions at the FIAK in Paris and in other countries have elicited positive reviews by French and foreign critics.

Michael Burdzelian is represented by the Prom Gallery exclusively for Germany and Portugal since 1980.

His pictures are unique in colour scheme and motif. Each painting is a work of 'balance'. His depicts everyday objects - many of which he brought from his Georgian homeland or found in antique markets - built up as sculptures.

Often the viewer will get the impression that the objects will collapse at any minute. This act of 'balance' creates a perceptible suspense in Michael Burdzelian's paintings.